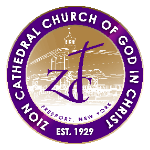 On September 8, 2001, the ceremonial groundbreaking for Zion’s new Cathedral took place. A little over a year later, on September 16, 2002, it was time to say “good-bye” to the edifice Little Zion called home for more than 30 years. On the morning of September 23, 2003, tons of steel and other construction material were delivered to the excavated site at 312 Grand Avenue to begin the construction of the building which would one day be known as “The House That Prayer Built.” Practically 32 years to the day Bishop O. M. Kelly appointed his spiritual son to the pastorate of Little Zion on its Opening Day, Bishop Frank Otha White announced the appointment of Assistant Pastor Frank Anthone White to the full Office of Pastor-The newly constructed and majestically imposing edifice thereafter dedicated by the late Bishop G. E. Patterson as ‘Zion Cathedral.’
My videos