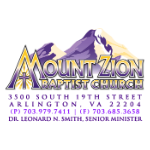 OUR HISTORY Late 1800's After the close of the Civil War, a number of Christians banded together to establish a Baptist church in Freedman's Village. This site is now the National Arlington Cemetery. They called this church "The Old Bell Church". Members worshipped under the leadership of the first pastor, Reverend Robert S. Laws. When the federal government moved the congregation from this location, they settled in nearby Alexandria County, which is now Arlington County, Virginia. In September 1866, another space was purchased on Mt. Vernon Avenue, which was later named Arlington Ridge Road. Here a new church was erected and named Mount Zion Baptist Church. This was a two-story red brick building with a white marble front. Reverend Joseph Matthews served as pastor for 15 years. Mid 1900's Reverend James E. Green was elected pastor in 1914, after many years of service. He joined Mount Zion in 1903. He served as superintendent of the Sunday School for three years and on the Deacon Board for nine years. He was a dynamic leader of the church and community. Under Reverend Green's pastorate, a new church was erected in 1930 at the Arlington Ridge Road site at a cost of $26,000. In 1942, the federal government condemned the property to make way for a network of roads. The Odd Fellows Hall at Columbia Pike and South Ode Street was selected as a temporary place of worship. Later, property was purchased at 19th and Lowell Streets. Groundbreaking services were held on Easter Sunday, April 9, 1944. The first services were held in the new building on the first Sunday in July 1945. Late 1900's In January 1952, Dr. Oswald G. Smith was elected pastor of the Mount Zion Baptist Church. Before coming to Mount Zion, he was assistant pastor at Metropolitan Baptist Church in Washington, DC. Early in his ministry, he emphasized the role of community service in fulfilling the Mount Zion Church mission. In 1956, he established a Deacon's Fund to assist both members and non-members in meeting emergency costs for goods, medicine, shelter, utilities, and other necessities. Today In November 1991, Dr. Leonard N. Smith became the ninth senior minister. Under the leadership of Dr. Smith, the membership and stewardship has nearly doubled. More than 2,500 have united with Mount Zion and the Church budget has increased to several million dollars. Mount Zion has purchased 22 acres of land in Woodbridge, VA in order to further their mission to go and make disciples of all nations as we're commanded. While working to gether to realize the vision, Mount Zion continues to expand its outreach with food assistance, tutorial and financial support to community service agencies. The radio outreach began in 1999. You can hear Dr. Smith every Saturday at 4:30 p.m. and Monday at 6:00 p.m. on MZBC Radio Outreach Ministry on WYCB 1340 AM and on Sunday at 6:30 a.m. on New Inspirational Praise 104.1 FM in the Washington, DC area.
My videos